What are the benefits of Rail Central?

Moving goods and products around the country effectively and efficiently is crucial for the economy, for competitiveness, and for the environment which is why national planning policy supports investment into more freight on rail. As well as benefits to the economy and to business, Rail Central would help to make supply chains more sustainable (moving freight by rail creates fewer emissions than moving freight by road) and the scheme could create more than 8,000 jobs.

Northamptonshire’s economy benefits significantly from the distribution and logistics industries – Rail Central would further reinforce this competitive advantage and contribute to the local and regional economy.

What about the impact this will have on the local villages? What about noise, light and traffic?

We are very aware we need to balance the provision of new national infrastructure with its local impact. Through our planning and technical work, we have landscaped, positioned and designed the components that would make up Rail Central so that they work operationally but minimise impact locally. We will need to demonstrate we have achieved this balance within our application for our Development Consent Order application to achieve permission. It will be the job of the Planning Inspectorate (and the Secretary of State) to make that decision having examined the application in detail.

What land does Ashfield Land control and will there be a need for any Compulsory Purchase Orders (CPOs)?

Ashfield Land and Gazeley GLP have acquired or has options on the significant portion of the land expected to form Rail Central (subject to consent). Through negotiations we are seeking to agree arrangements on any land we don’t currently control.

What is the overall timetable?

The final plans (known as a Development Consent Order, or DCO application) were submitted to the Planning Inspectorate (PINs), the government body responsible for considering NSIP applications, in September 2018.

How do the Rail Central proposals fit with the Joint Core Strategy (JCS)?

The application for Rail Central will be in the form of a Development Consent Order (DCO) because Rail Central is classified as a Nationally Significant Infrastructure Project (NSIP). It is therefore separate from and outside of the JCS process and is not a ‘conventional’ planning application (ie not a Town & Country Planning Act (TCPA) application).

Although the final decision on the proposals is likely to be made by the Secretary of State following an Examination of the application by PINs, weight will be given to the responses and views from local authorities (ie those included in the JCS process).

Ashfield Land previously made representations to the JCS process to signal its intention of bringing forward a rail-connected commercial scheme in this location. Such early signalling of intent is generally thought to be useful to the JCS process as a means of providing guidance on developments that might be coming forward.

The simple answer is yes. Rail Central is a proposal for a SRFI which will include directly rail linked buildings (ie there is a physical railway connection direct to the building) and also rail served buildings (ie they are able to handle goods moving to and from the rail terminal using special vehicles but they are not physically connected to the railway). Different operators will potentially make different use of the rail connectivity according to their business and customer needs. This type of use is consistent with Government policy (the National Planning Statement for National Networks). Ultimately, the combination of rail-connected and rail-accessible buildings will encourage the shift to a higher proportion of overall goods travelling by rail which is what the Government policy supports.

How can the local community get involved in a planning application that will be determined by the Government?

The Nationally Significant Infrastructure Project (NIP) planning process is specifically designed to ensure local involvement and that local communities and stakeholders have a voice. More information is available at the Planning Inspectorate website.

We completed three rounds of consultation on the draft plans (the first took place from April to October 2016; the second phase from March to April 2018; and the third from June to July 2018). This comprehensive local consultation process has ensured local residents, elected representatives and other interested parties have been able to take part in the consultation process and give their feedback. For more information please visit the get involved page.

Is Rail Central needed when DIRFT is just up the road?

Aside from the Government policy point setting out a requirement for further investment into strategic rail freight facilities, the DIRFT scheme is on a different timetable (ie DIRFT is operating now, DIRFT III is consented and being built now, and Rail Central is on a later timescale). The earliest the first phase of Rail Central would be open and operating (subject to planning consent) is 2021. The demand for rail freight and rail freight interchanges is expected to be significantly higher by then in line with annual increases.

Crucially Rail Central could also serve a different type of customer because the potential for direct access to the West Coast Main Line that is possible from Rail Central creates a point of difference with DIRFT (which only connects into the Northampton Loop Line). 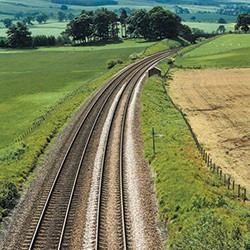